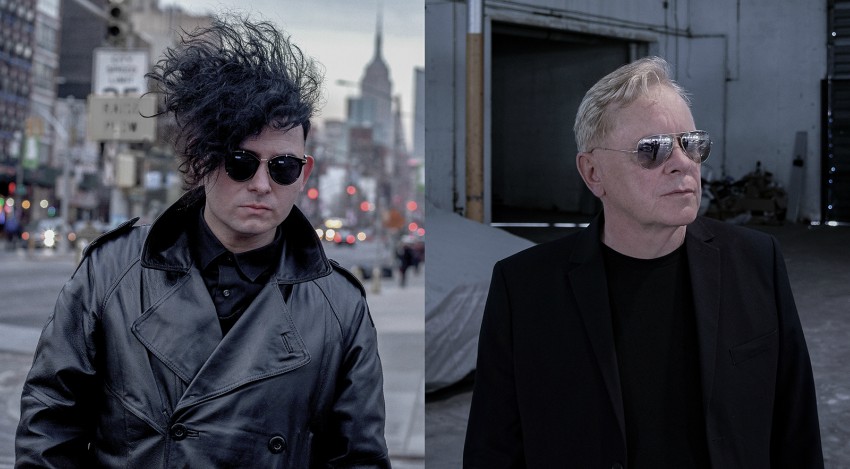 New York City-based Composer/Musician/Producer Zachery Allan Starkey uses analogue synthesizers and electronics to craft dark, melodic, and heavily emotional dance floor journeys. Starkey garners the influences of Techno, Electro, House, Post-Punk, Italo Disco, SynthPunk, and HI-NRG, pulling elements from this spectrum to create his own unique sound of self-expression. He has released his music both as Zachery Allan Starkey and as ZGRT.

See our exclusive interview with him below:

I come from a very blue-collar, working-class family, and music is huge in my family. My parents, my aunts and uncles, they all deeply love music. So music was always a part of my environment. My father is a drummer and percussionist, and when I was a kid, he played in a biker rock band and a funk band. So one night, I’d be seeing my Dad play in a biker bar, the next night, I’d see him play in a funk club. I think this automatically gave me the ability to appreciate and enjoy a wide range of my music. My Dad always told me to “listen to the drums, the drums are their own song”, and I think the focus on a rhythm that my Dad gave me is a big reason I ended up making a sort of dance music. I started making my own music using a very cheap Yamaha keyboard and a four-track tape recorder when I was 16 or 17.

When I was 12 or 13, I heard Blue Monday by New Order in a PBS documentary, and it changed my life. I didn’t know that music could sound so icy, so cool, so progressive and lean, but orchestral and mysterious. I had been listening to a lot of 70’s Punk bands like the Sex Pistols, Buzzcocks, Patti Smith, Talking Heads, PIL, and New Order sort of opened the door for me to more electronic-based artists like Depeche Mode, Giorgio Moroder, Pet Shop Boys, Kraftwerk,  as well as New York Club music, Detroit Techno, and Chicago House music. I am also a huge fan of the work of symphonic soul composers Curtis Mayfield and Isaac Hayes. For writing lyrics, definitely Lou Reed. Martin Gore from Depeche Mode really got me into playing synthesizer because I thought he looked really cool, but it was really Bernard Sumner’s work in New Order that got me into actually writing songs and composing music. As such, it’s been really cool to work with Bernard on my new album, Fear City, as well as play some shows with New Order in the past few years.

I think that musical composition and songwriting are more important than the gear that you actually use, it’s the human mind, not the machine, that writes the music. That being said, on the Fear City album I have used an arsenal of hardware synths, Dave Smith Prophet 5 and 12 for lead and chord pad parts, Roland Super Jupiter for leads, Roland Juno 106, Korg MS-2000 and MS-10, a few Eurorack Modular systems. For the synth bass parts, I used the Moog Voyager as well as the Moog Slim Phatty and the Novation Bass Station. I also used conventional guitar, bass guitar, and piano on some tracks. For drums, I used a combination of the Roland 808 and 909, as well as the Alesis SR-16. I prefer to use hardware instruments for playing and recording…the album recorded and mixed in Logic, and mastered in Pro-Tools. Bernard prefers recording in Cubase, so he recorded his parts on the tracks he worked on in Cubase.

Oh yes. When I started, I had a few cheap Yamaha synths, a cheap drum machine, and a digital hard track recorder. That was it, I recorded using only hardware because cheap, old hardware was all I could afford. I would play really fast sequencer parts by hand because I didn’t have a sequencer! Now, of course, I have a much wider range of older and newer hardware synths and drum machines and record in Logic, but I think I am still very focused on making sure the structure of the music itself is good before anything.

Jhene Aiko. I don’t know if she is still considered new, but she’s never really broken into the mainstream either,  and I really love her music. I am also really into a newer post-punk band from London called Formation. And there’s a lot of cool techno and electronic stuff happening in NYC and Berlin right now.

New York City! I’ve lived in New York for a long time, and the city itself is literally what inspires a lot of my music. I walk around NYC, looking at the city, the people, and I start to write music inside my head as I walk down the street. Obviously the sounds I hear in Brooklyn techno and house clubs also really influence my current sound…I’ve tried to take what I hear in the clubs and the raves and at after-hours parties and put that into my own music.

My ultimate goal as a composer/musician/songwriter/producer is to make a piece of music from one of my own experiences so that someone else can hear my music and perhaps it will help them get through a tough day. My way of dealing with feelings of hopelessness, sadness, depression, despair, and anger, is to write music about those experiences. I hope my music can help other people get through tough times and experiences. We are living in a very dark world after all.

Some sort of fusion of techno, synthwave, classical, disco, jazz, and symphonic soul.

Be proud of who you are, you’ll never be anyone else. Enjoy yourself!